The 2.0 turbo is powerful enough but doesn't stir the soul like it should

It seems virtually every new car is offered with a 2.0-liter turbocharged four-cylinder engine these days. Including, starting with the 2021 model year, the base version of the Toyota Supra. It’s impressive how much power and efficiency automakers have wrung out of a soda bottle’s worth of displacement, but not all of these small-but-mighty powerplants fulfill their missions with the same level of success. Including, again, the base version of the Toyota Supra.

By now, you’re probably aware that the reborn Supra relies heavily on parts and engineering sourced from BMW. In many ways, this is not a bad thing — BMW clearly knows how to screw together a solid automobile. The Supra shares most of its oily bits with the BMW Z4, including its inline-four- and six-cylinder engines and eight-speed automatic transmissions (a manual is coming only for the inline-six for 2023). This version of the ubiquitous 2.0-liter turbo produces 255 horsepower and 295 pound-feet of torque, which is plenty to provide accelerative entertainment in a small car like the Supra. Toyota claims it’ll do 0-60 in about 5 seconds.

But there’s more to the experience of a small, lithe, two-seat sports car than properly quick acceleration. And unfortunately, this is where the 2.0-liter falls a bit flat. Opinions vary on how much it matters, but the engine’s power delivery doesn’t feel appropriate for a vehicle with the sporting intentions of the Supra. There’s solid grunt just a few hundred revs past the engine’s idle, and the power continues pretty much seamlessly throughout the middle of the four-cylinder’s rev range — not surprising, considering Toyota and BMW say it makes peak torque between 1,550 and 4,400 rpm. But there’s no exhilarating rush as it winds toward its shift point around 7,000 rpm, no great audible excitement in its soundtrack … and no clutch pedal to make it feel more involving that it otherwise may be. 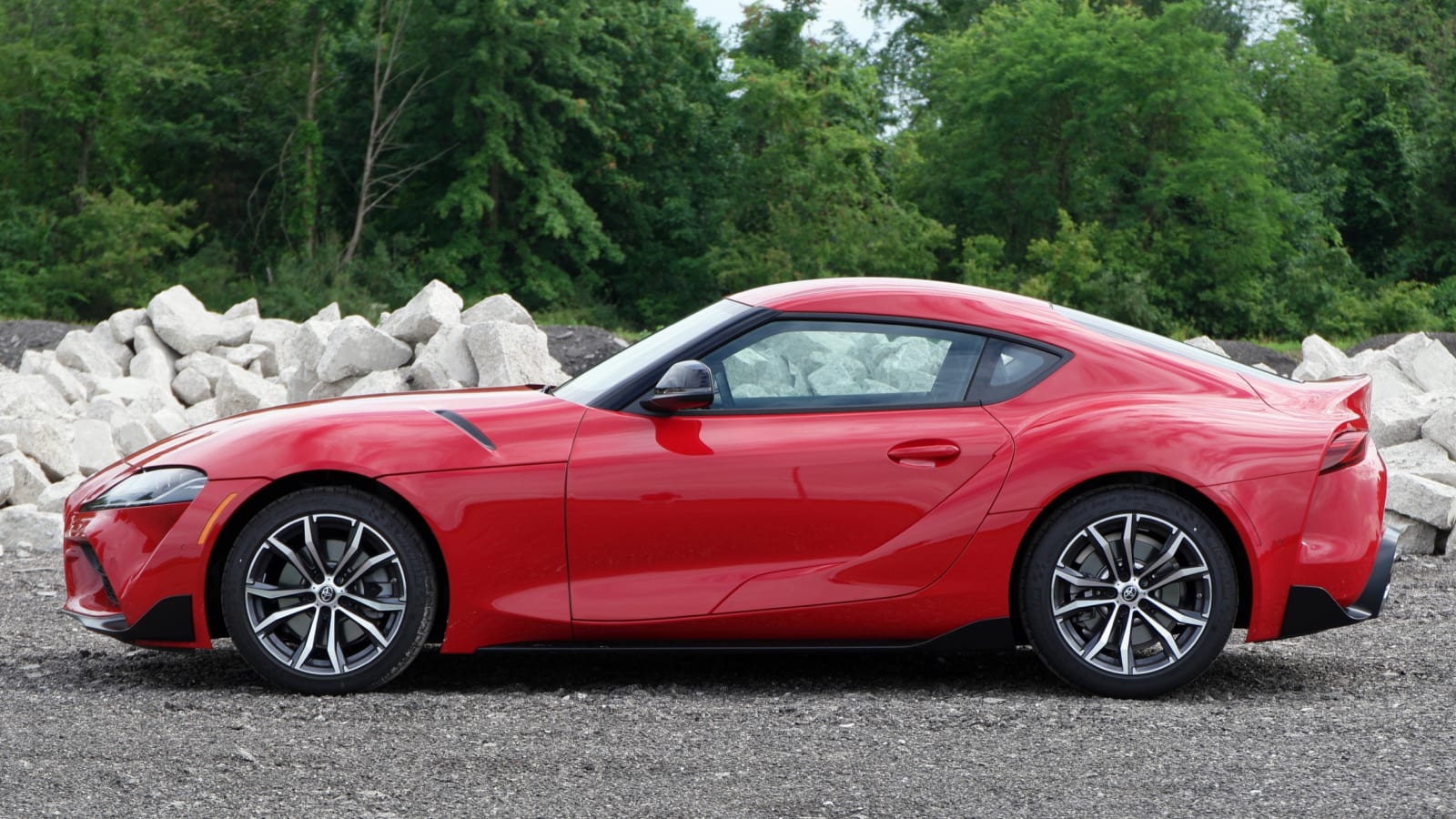 To be clear, none of our qualms with the turbocharged four-cylinder make the Supra a bad car. It’s not. In fact, it’s a rather good one. But, as we wrote after our initial few hours driving the new-for-2021 Supra 2.0, “it’s acceptable and still plenty good to drive, but it’s no Supra miracle.” Put simply, for the full-fat, soul-stirring Supra experience, the inline-six with its 382 hp and 368 lb-ft is a more moving and ultimately more desirable option.

Our quibbles with the base Supra extend beyond its powerplant. One noteworthy subtraction is the 3.0’s adaptive suspension, removed in favor of standard fixed springs and dampers. So, whereas a Supra 3.0 owner can choose from three distinct modes that move from firm-but-compliant to boom-crash, Supra 2.0 owners get something in between. We found the ride to be pretty good on relatively smooth asphalt, but throw a frost heave or pothole into the mix and things go south quickly. Long stints behind the wheel on iffy pavement left us wishing we could soften things up for a more grand-touring experience, something that’s possible with the pricier 3.0 but not with the entry-level 2.0.

The Supra 2.0 also loses out on the fancy, BMW-engineered active rear differential. So there are no fancy computers monitoring traction at the rear wheels based on everything from speed, engine rpm, yaw rate, brake pressure, throttle application and steering angle, and no ability to continually adjust power from the left and right wheels between 0 and 100%. In normal day-to-day driving, the loss of this fancy rear diff won’t mean much, but owners who truly plan to push their cars to the limit will be missing out. The final four-cylinder concessions worth mentioning are smaller disc brakes, a weaker stereo system and a switch from power-adjustable to manually adjusted seats. 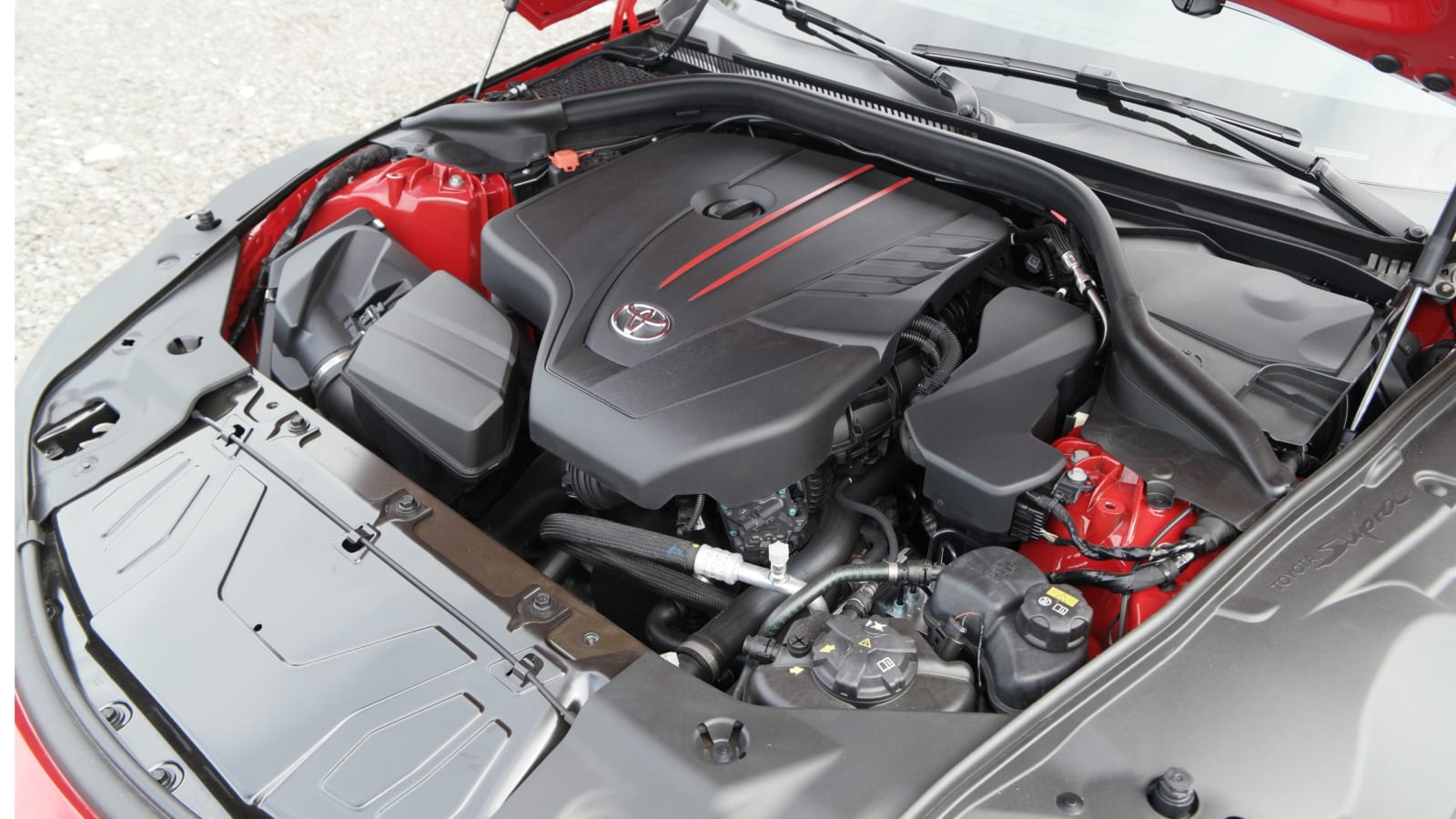 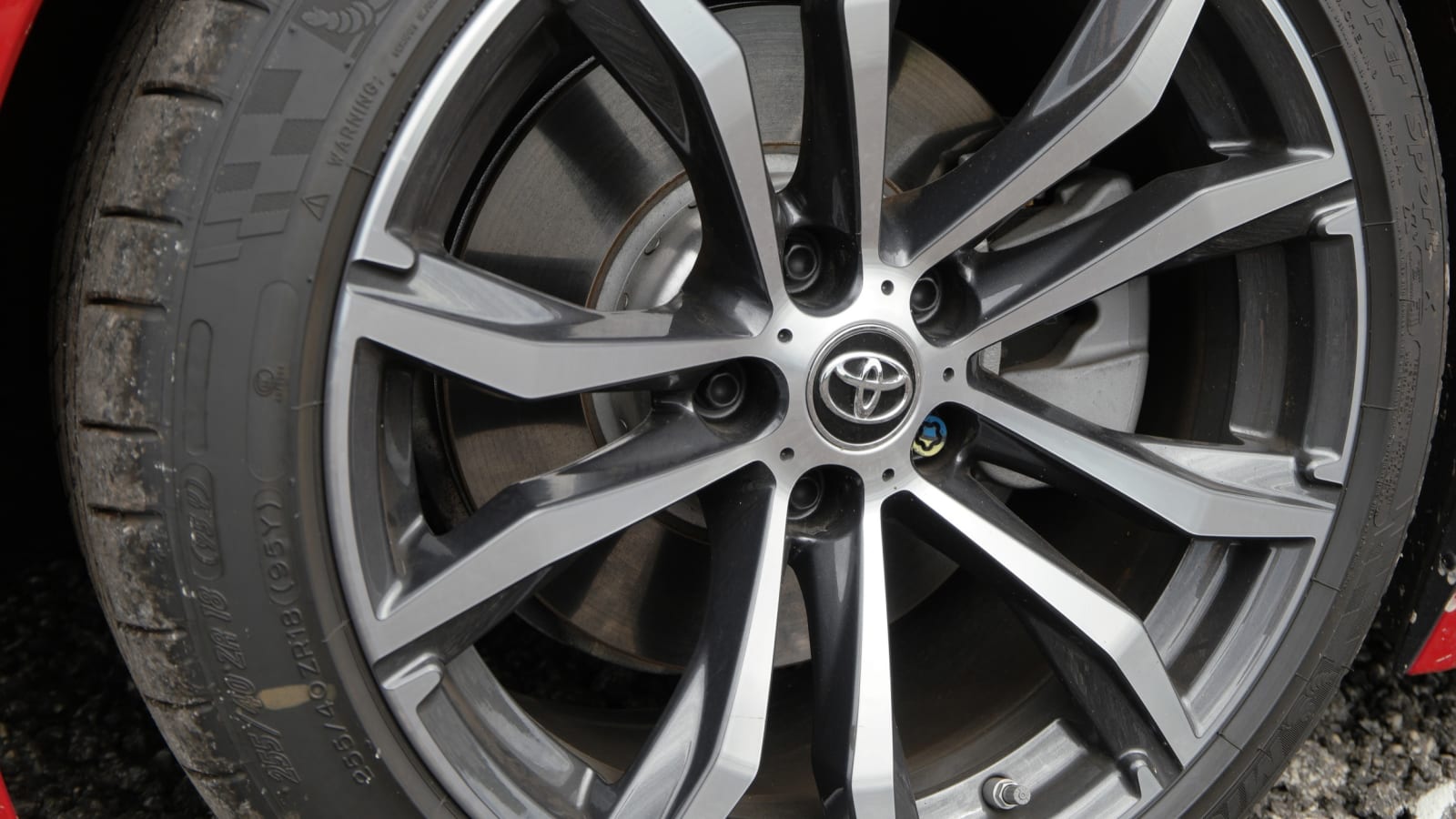 Beyond the uninspired power delivery, the Supra 2.0 drives very well. The chassis feels extremely solid, and when coupled with a stiff suspension and perfect 50/50 weight distribution, the Supra boasts exceptional roadholding capability. With a good prodding, there’s enough power even from the four-cylinder to break the rear loose, but that’s the slow way ‘round a bend. The coupe’s steering is precise and feels properly weighted, which makes the little car feel capable of slithering through switchbacks and chicanes that would leave larger and heavier cars a ponderous mess.

Unfortunately, highway touring isn’t nearly as enjoyable as those curvy back-road shenanigans. Visibility isn’t very good in any direction other than straight ahead, and the low-slung shape feels perilous next to big rigs.

We also wish the Supra came with something better than BMW’s last-generation iDrive software. Besides a ton of knob twisting and button pressing necessary to complete even basic tasks and a sometimes confusing menu structure, we’ve had problems pairing iPhones to use Apple CarPlay, and since Android Auto isn’t supported at all, well, non-Apple users are just plain out of luck. At least the screen is well placed and easy to read from the driver’s seat. 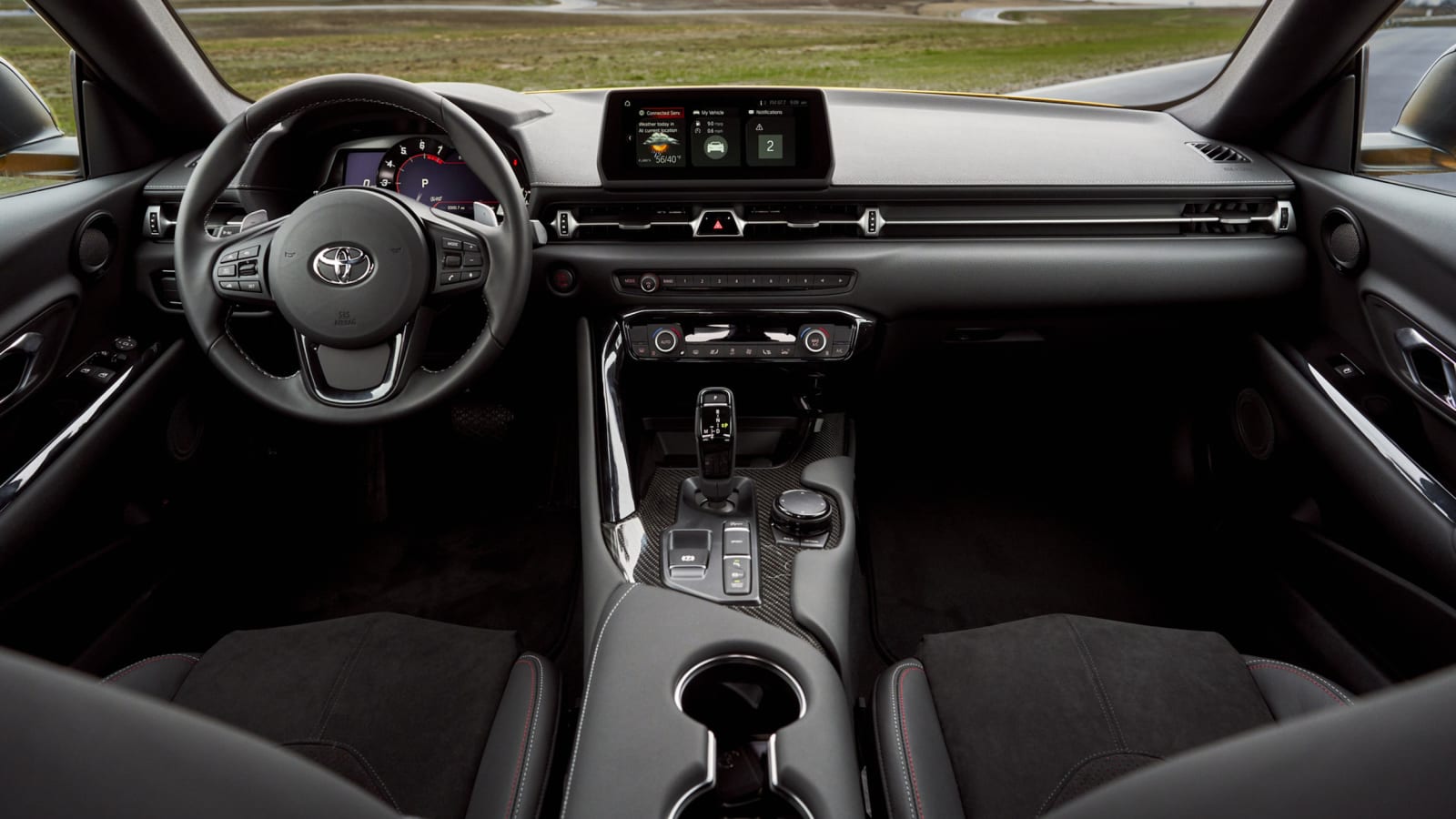 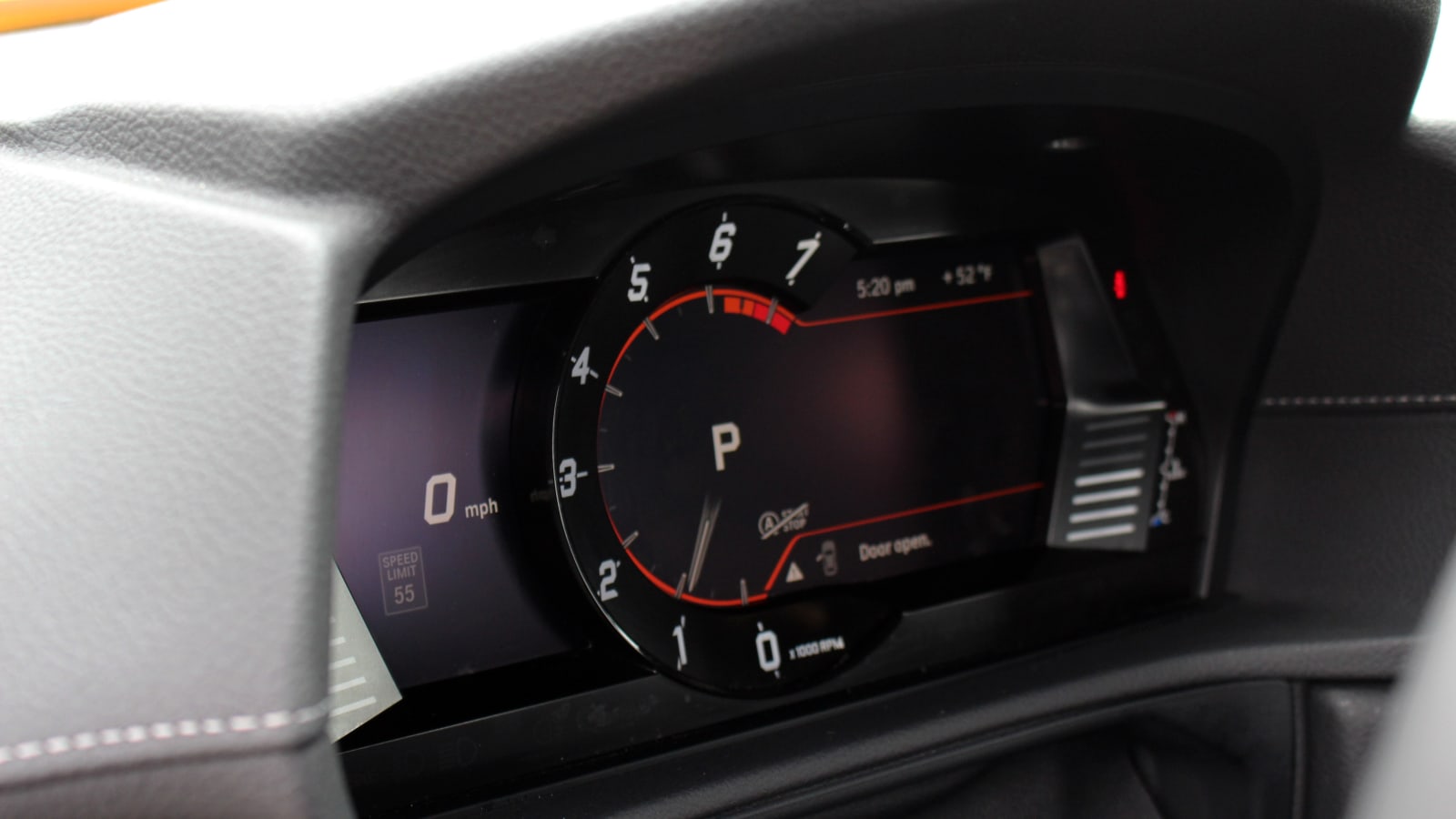 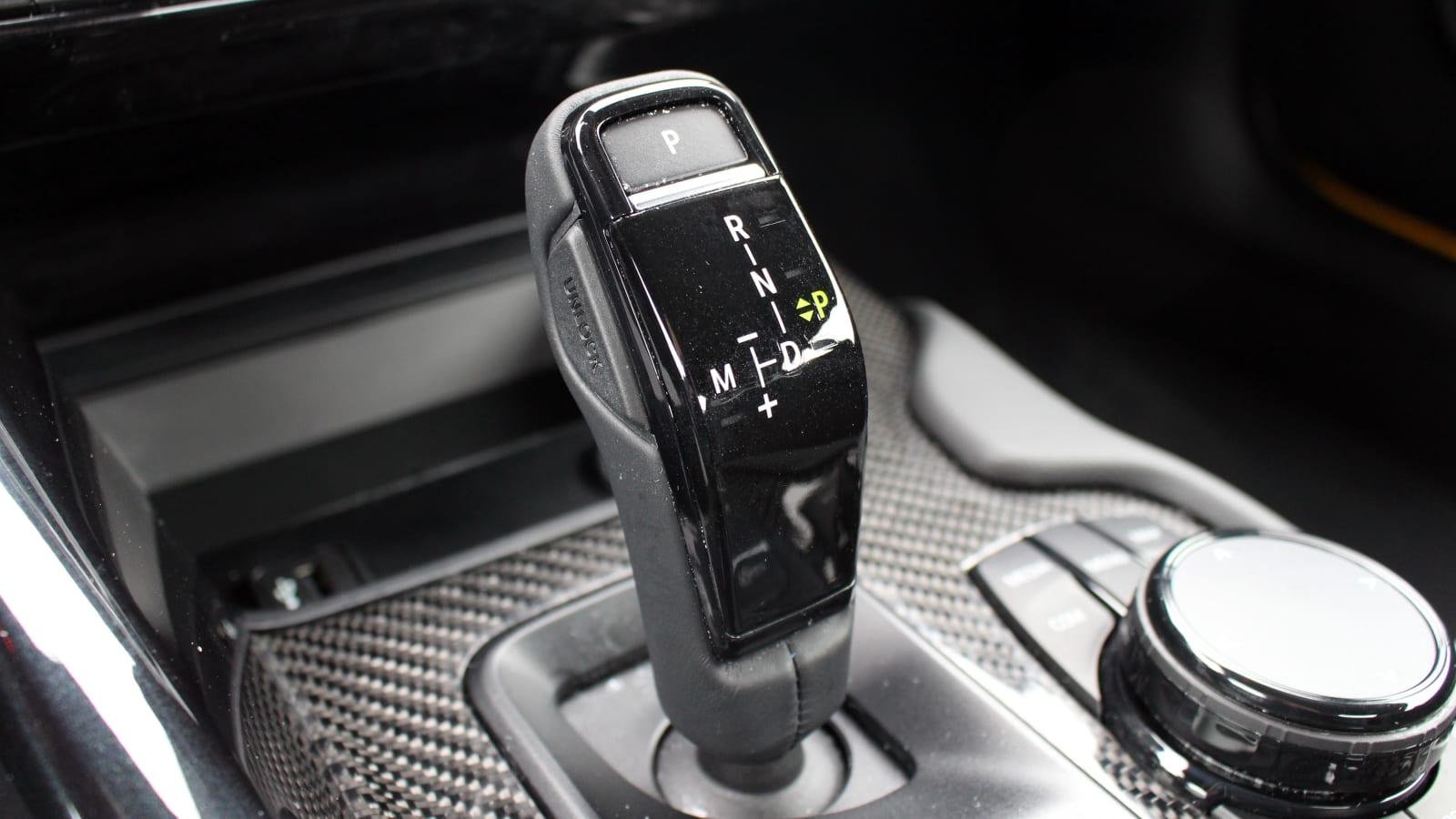 Naturally, downgrading a bunch of components and installing a smaller engine means the Supra 2.0 is significantly less expensive than the Supra 3.0. At $43,945, the lower-spec Supra is exactly $8,000 less expensive than its $51,945 sibling. That’s a worthwhile savings, to be sure. Buyers who want the looks of a top-shelf sports car but don’t care about the top-shelf drivetrain and suspension will surely be pleased by the overall package. Our test car included a Safety and Technology package that added radar-based cruise control and blind-spot monitoring (among other things), navigation for the 8.8-inch touchscreen and a better JBL stereo. So equipped, the sticker rose to $47,615.

Whether or not the Supra competes with the mechanically similar BMW Z4 — or, perhaps more succinctly, whether or not potential buyers would ever cross shop them — is debatable. But if you did, you’d find that the four-cylinder Z4, which is a soft-top convertible instead of the hardtop Supra, starts at $50,895. You can also outfit that base Z4 with a version of the adjustable suspension and the fancy rear differential as part of a Dynamic Handling Package for an extra $2,450, which seems reasonable. 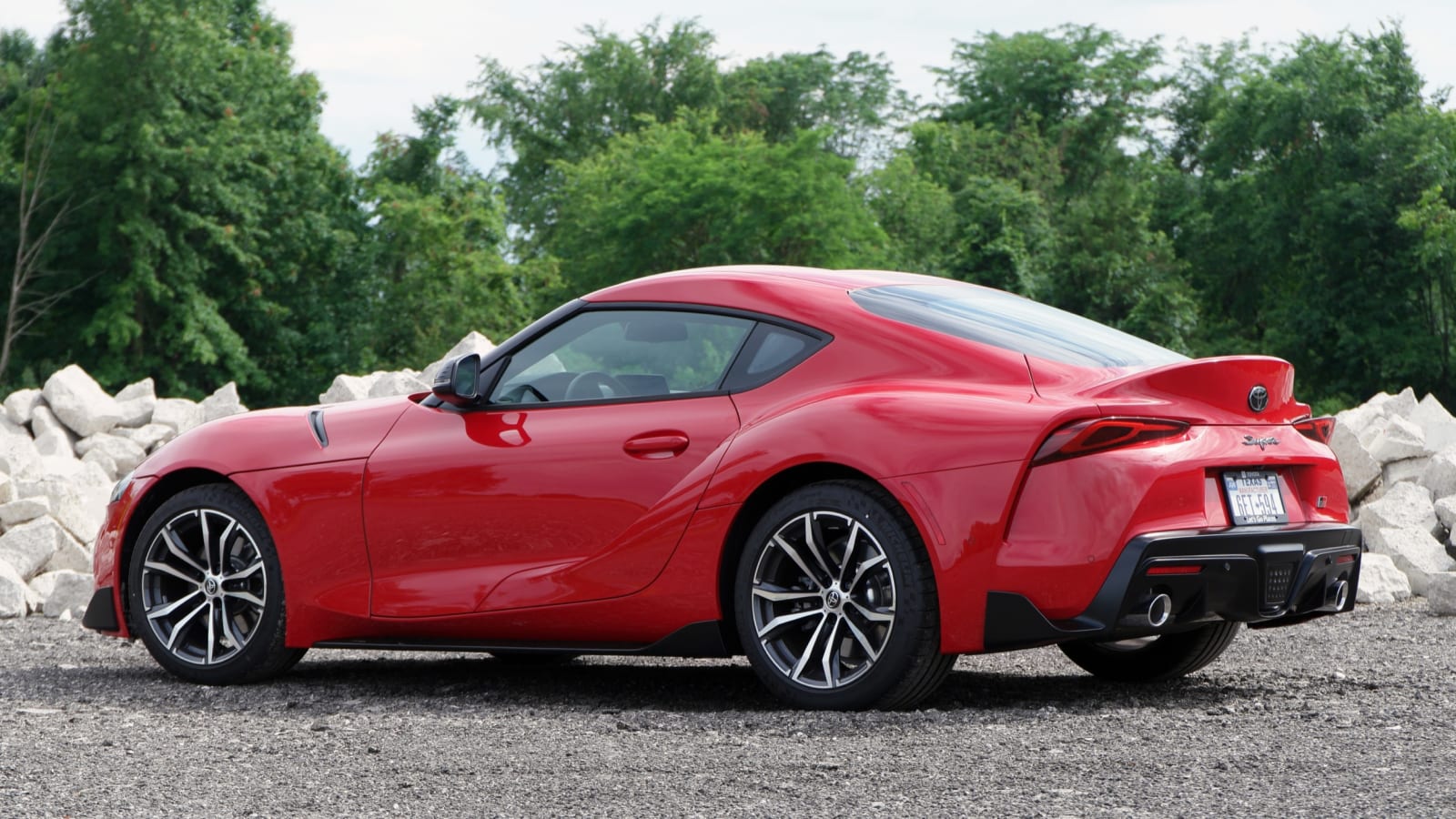 Other competitors are the Porsche 718 twins, available in either Cayman coupe or Boxster droptop form. Either way, expect to pay more for the Porsche badge; the Cayman starts a hair over $60,000 and the Boxster adds a few grand more. Right now, the only other potential Supra rivals are the Chevrolet Camaro, Dodge Challenger and Ford Mustang, each of which brings a significantly different and muscular character than the light and lithe Toyota. That's all going to change once the new Nissan Z officially hits dealerships. Intriguingly, the Z boasts 400 horsepower — a whopping 145 more ponies than the Supra 2.0 and even 18 more than even the Supra 3.0 — and an optional six-speed manual transmission. It's also going to start "around $40,000," making it around $4,000 cheaper than the base Supra and $12,000 less than the full-fat six-cylinder version.

When lined up against its German competitors, the Supra in both 2.0 and 3.0 guises comes across as a reasonable deal. Compared to its American peers and especially against its upcoming challenger from Japan, well, things look less rosy. In any case, if we were the ones spending the dough on any Supra, we’d dig just a little bit deeper to make sure six cylinders lived under its hood. 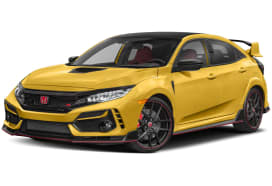